Clash of the Seraphim 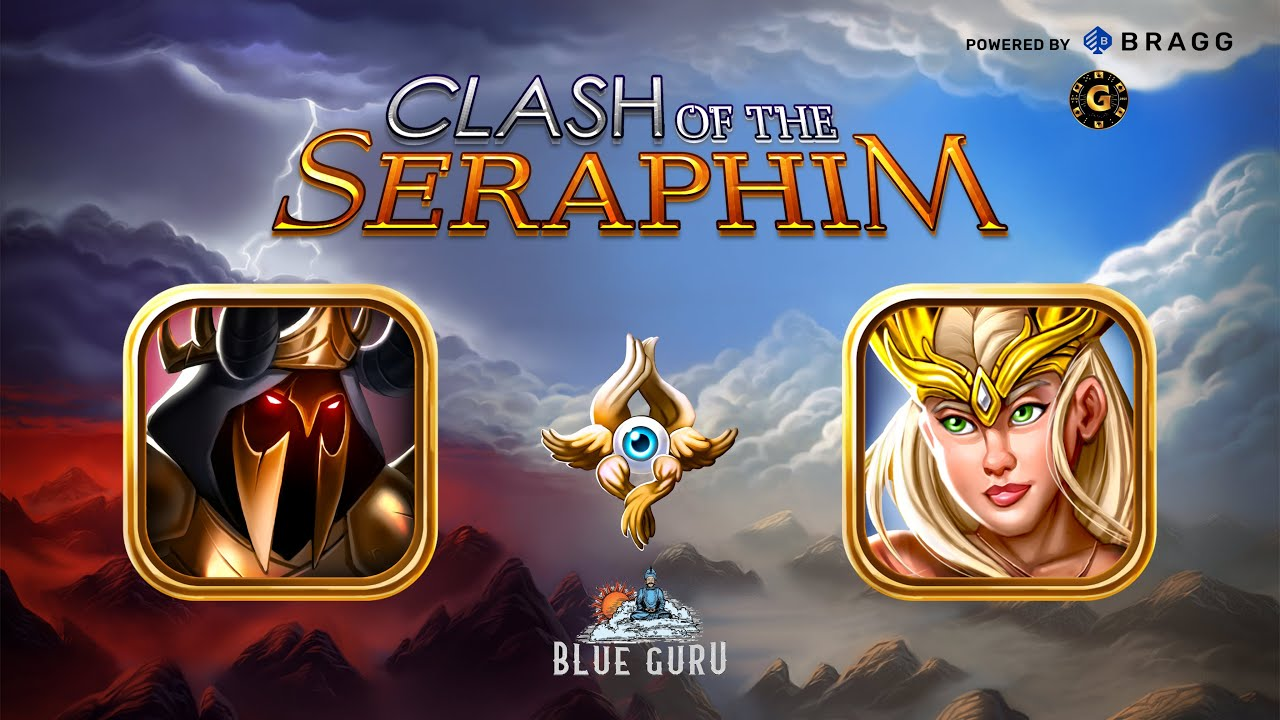 Blue Guru Games bill themselves as story makers, and for their latest Clash of the Seraphim online slot, they've done a pretty amazing job. Clash of the Seraphim is about a divine battle between the forces of good and forces of evil that would take place in secret around us without our knowing it. And it doesn't stop there: "Since the War of Heaven, the seven Seraphim and their armies have fought the fallen legions of Lucifer to control over creation". Pretty epic isn't it? If you fancy seeing good versus evil, angels versus demons on the reels, then check out Clash of the Seraphim.


This epic fight between good and evil is pictured from the start when you can see an angelic character on your right and face his demonic opponent. The rest of the background follows the same pattern with several references to heaven and hell, storm against sunbeams, darkened sky against the clear blue sky, white cloud against black cloud, we immediately understand that two worlds clash. In the middle of this war zone floats a transparent 7x7 game grid covered with other good and bad symbols. To keep you in the mood, dramatic music rises and falls as the game unfolds. 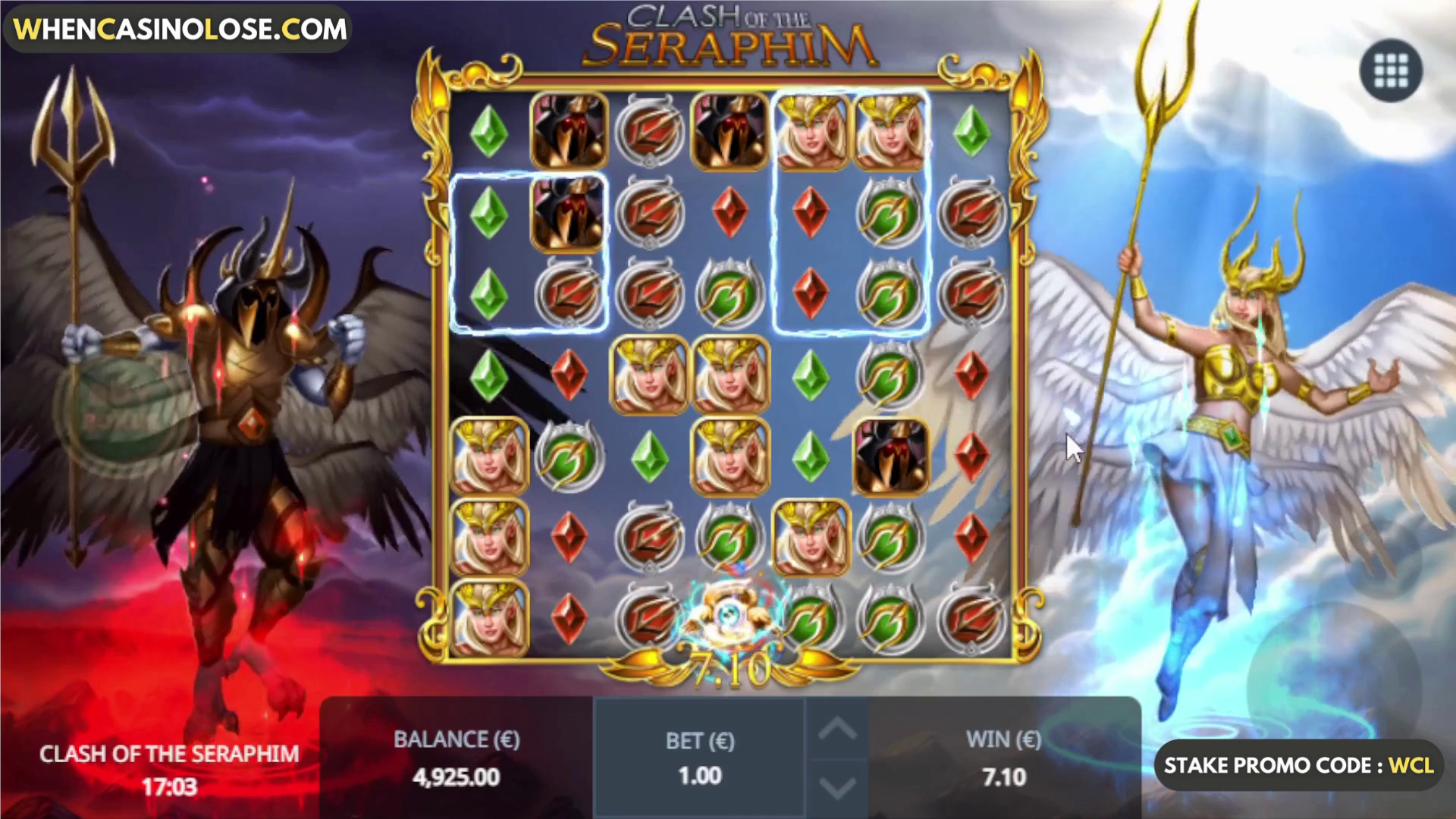 Clash of the Seraphim is a cluster payout slot where wins are formed when five or more matching symbols land next to each other, connecting vertically or horizontally. The Winning symbols are removed from the grid, and the symbols cascade into the newly created spaces. If a new cluster forms after the cascade, the process is triggered again. The game is powered by a model very volatile math, producing a return of 95.51%. Joining the fight of good versus evil is possible on any device, you can choose a wager from 10p/c to £/€200 per paid game spin.


There are not many paying symbols on the grid to browse. These are green gems, red gems, green-bottomed spears, red-bottomed spears, an angel, and the evil character. Earnings entry-level stakes range from 0.1x to 0.5x the stake for five matching symbols, with a maximum of 30x to 1,000x the stake for a win of 40 to 49 matching symbols. The Winged Shield 'W' symbols are wild cards that substitute for all symbols except scatters. 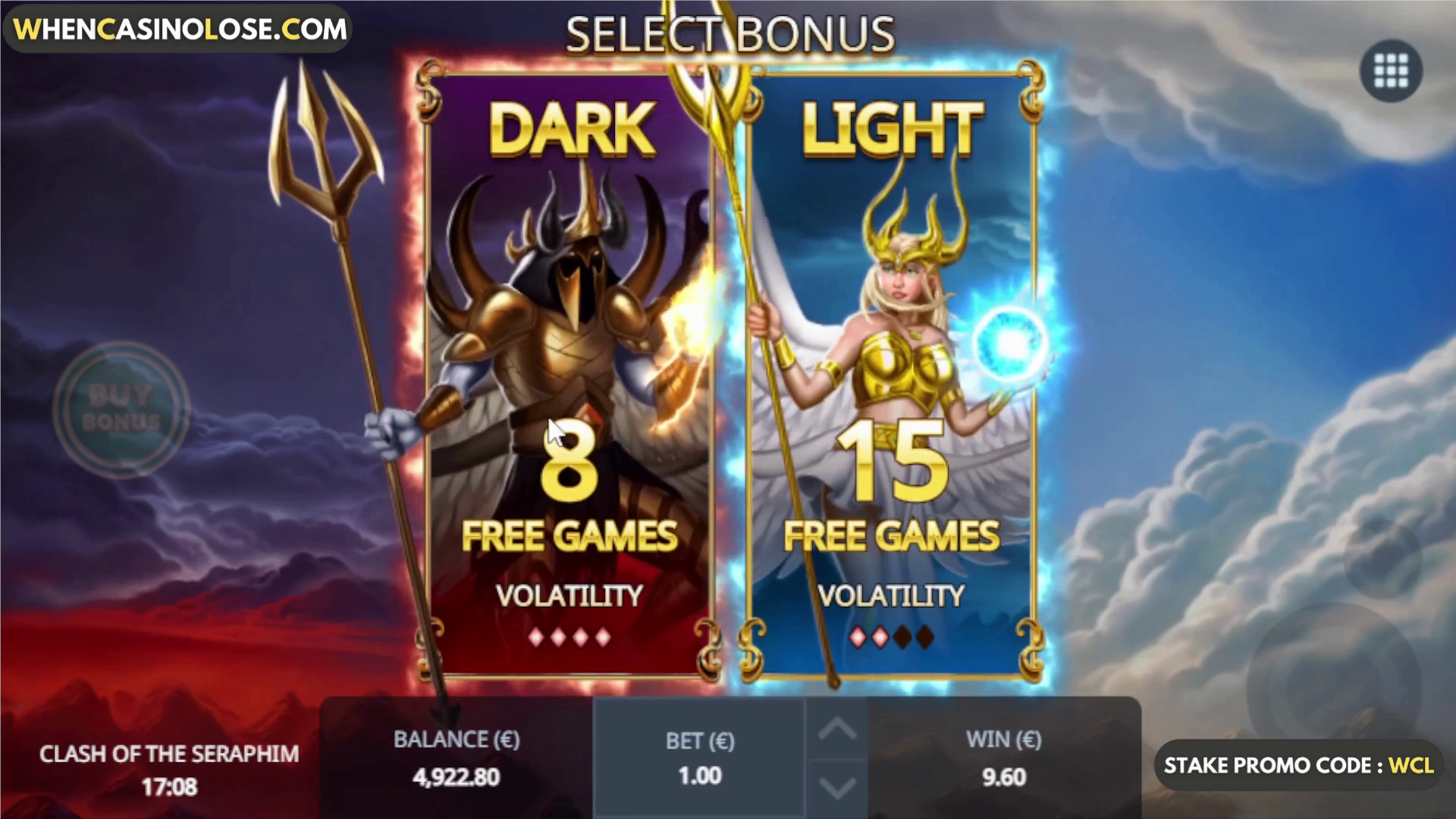 Battle in Clash of the Seraphim is helped to its crescendo by features like drop zones and two selectable free spin bonus rounds.


There are three drop zones: a dark zone, a light zone, and a scattering zone. With each throw, the zones can change position and size. The size varies from 2x2 to 3x7. During your free spins, the restriction of size does not apply. The Scatter zone is always at the bottom of the central reel. The Scatter area is removed for free spins. If a wild symbol lands in a dark or light drop zone, all symbols in the zone are converted into wilds. Landing more than one wild in the same area applies a multiplier which is equal to the number of wild symbols.

The Seraph's Eye scatters symbol appears randomly on the central reel, when it lands on the lower scatter area, called the "Eternal Gate area", the free games feature is activated. Once triggered, players can choose the more volatile dark 8 free games or the less volatile light 15 free games. With each selection of the free game, only the area you have selected (clear or dark) appears on the reels. Additionally, the drop zone size limit is removed. Scatter symbols do not appear during free spins, so the feature cannot be retriggered.


The story is quite interesting, it tells the fight between good and evil even if there is not really a real fight to be fought in the game. Simply the angel against the demon, and yet there is sometimes the action! When the savages land in an area and turn everyone into savages! Combined with the music, this could make you shiver, especially during the free spins because the landing zones are generally larger, for example. compared to the free spin it is important to note that there is a real difference in your choice, indeed a dark game although more volatile can sometimes yield very little, this is what happens when you choose the camp of the wrong !

To conclude, Blue Guru Games hasn't finished surprising us with its intriguing slot machines, whose graphics and soundtracks are often remarkable and original.